Prey and Predator was a gym class game that we used to play that would involve two or three teams with different roles. Those roles are the "prey", the "humans", and the "predators". The rules are pretty simple, if you're a prey run from everyone, if you're a "human" run from the predators and chase after the prey, and finally if you're the predator, chase after everyone. Those rules are easy to explain to a person, not so easy to explain to about 1000 or so circuit components.

This was a way to program without knowing how to program. When I was younger, I needed an outlet for the 'logical' part of my brain that programming would have filled perfectly, but I never figured out how to actually program (and I didn't know anyone who did). Around the same time, Minecraft was becoming a huge hit and happened to implement something called "Redstone" which mimicked very basic computer components called 'logic gates' and was designed to help players control whether doors were open or closed and things like that. They could also do other simple things like check if two switches were on, or invert a signal and so on, but it turns out (just like in real-life) by combining lots of these basic components, you can build very complex machines!

People started out building calculators, seven-segment displays, etc... eventually people even starting building games, CPUs, ALUs, and full fledged (4 bit) computers! This fit into my niche pretty well and I got involved! Below you can see an image of the Minecraft Redstone logic and the (roughly) equivalent circuit. 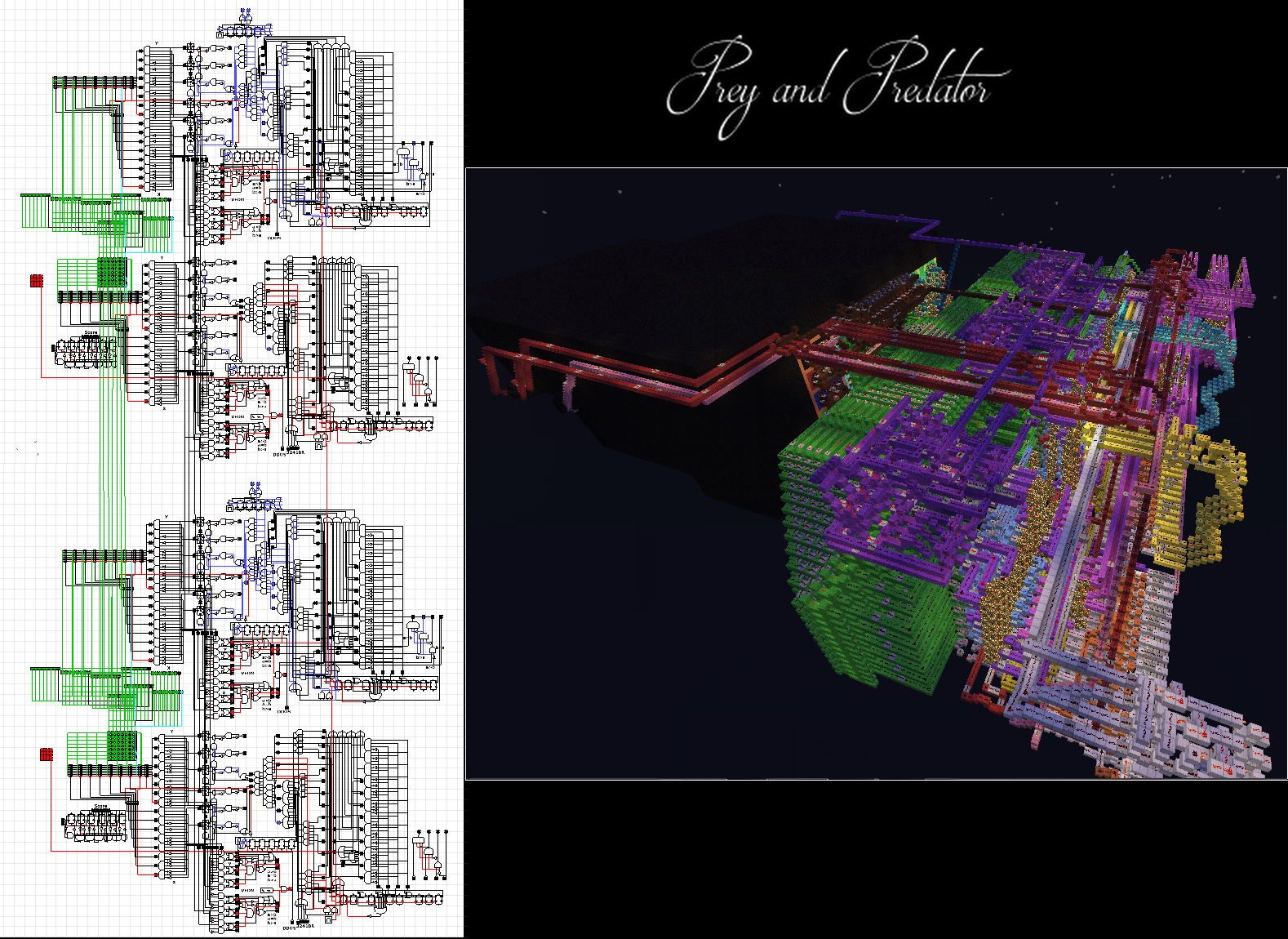 What does all that do?

There are eight components (shown below) that had to be built out of Redstone logic, in order:

Was it a success?

I started this somewhere between grade 9 and 11, and it took me two(ish) years to finish. That being said, this was my first foray into logic and that sort of thing, with no formal (or informal) training, and I only worked on this recreationally. I learned a ton about circuits, design, problem solving, research, and I really enjoyed playing this "puzzle game" as I see it. So, I'm definitely glad I went through this. As for the actual final product... Well it takes about 10-20s per turn, characters occasionally move twice, they occasionally die randomly, and every once in a while, the game will just reset. But I like to consider those features, rather than bugs: spurts of strength, disease, and extinction respectively :p.

I never made a video about it, although I might in the future, but try it out yourself (above)! I found that it worked (surprisingly) best on the latest version (1.13.2 at the time of writing), even though it was written in version 1.7 (The lights stop working on that version for some reason). If needed the game is located at the world coordinates (200, 100, -700).